European Mobility Week in Ljubljana : Not only a week, but a whole year 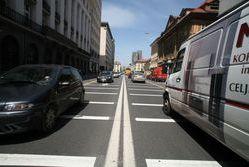 From 16 to 22 September 2009, hundreds of European towns and cities will participate in the eighth edition of the European Mobility Week (EMW), including Ljubljana. In the framework of EMW a CIVITAS Day is planned on Saturday, 19 September.

At a recent press conference, the City of Ljubljana presented activities under the slogan “Good climate of my city” to the media. The speakers emphasized, that atmosphere in cities is formed by the quality of the environment, as well as by a social connection among the citizens and general vibe in the city. They underlined the importance of local level efforts to tackle climate change, achieve a sustainable, clean and energy efficient urban transport system and improve the quality of life through the promotion of public transport, cycling, walking and alternative transport modes. During EMW, transport by city buses will be free of charge for all Ljubljana city card Urbana users, and the public transport company LPP will inform citizens on how to use the card. EMW will be concluded by “In Town Without My Car!” day. Several streets in the city center will be closed and there will be no access for motorized vehicles for an entire day (except public transport, taxis and vehicles with permission). The initiative will offer a chance for an individual thought about how sensible the use of a car throughout the year is.Furthermore, there will be activities, based on the promotion of an environmentally friendly lifestyle and European Commission representatives will provide a variety of information on the matter. Citizens will, among other, have a chance to spin a wheel of fortune and win some eco-friendly practical awards.“I wouldn’t speak about a week of such activities, but rather about a whole year,” said Zoran Janković, the Mayor of the City of Ljubljana, trying to highlight how important “green” efforts are. Some of them, such as expansion of the city’s public transport, implementation of hybrid buses and Park&Ride system, improvement of cycling infrastructure, launching the City Bike project and others, will be realized thanks to CIVITAS ELAN. The project will also allow citizens to participate with their own perspectives and expectations, which would help the decision makers to make the right ones.