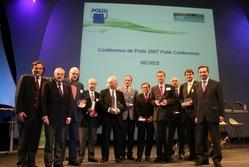 Within the framework of the annual Polis conference, this year taking place in Toulouse and hosted by Polis President and Mayor of Toulouse Mr Jean-Luc Moudenc, European Commissioner for Transport Jacques Barrot handed out the first OSMOSE Awards on urban transport innovation to Barcelona, Bremen, Freiburg, Graz, Emilia Romagna, and Stockholm on 16 March 2007.

The OSMOSE Awards, launched within the framework of the European NICHES Project on urban transport innovation, want to reward local and regional authorities that have shown the courage to introduce innovative and daring measures in order to meet today’s challenges in the urban transport field in a sustainable and effective way. The Awards more particularly look at the most promising new initiatives, which today still occupy a ‘niche’ position but clearly have the potential to become a ‘mainstream’ urban transport policy application in the future.The NICHES Advisory Committee, consisting of a selection of high level European transport experts, chose the winning local and regional authorities for 4 categories of innovation.Seamless Mobility ServicesWinner: the city of BremenInnovative Approaches in City LogisticsWinner: the Italian Region of Emilia RomagnaNon-polluting and Energy-efficienVehiclesWinner: the city of GrazInnovative Demand Management StrategiesWinner: the city of BarcelonaIn addition, the Jury decided to reward two more cities as Gold Star winners, for their integrated strategies that should become mainstream approaches in other cities on the long term.Winners: the city of Freiburg and the city of StockholmFor more information on the OSMOSE Awards 2007 please visit the official OSMOSE website and the 2007 Annual Polis Conference website.This CIVITAS news is taken from the 2007 Polis Annual Conference Press Release and granted by the organisators of the conference as well as the above shown photograph.