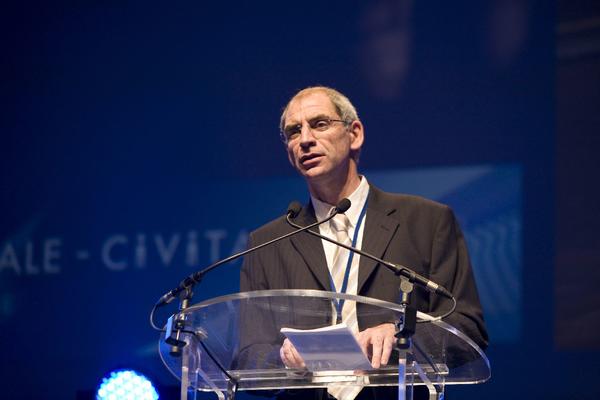 As the snow started to fall in the city of Aalborg on the morning of 20 November, 150 truck and bus drivers were heating up in a garage near the airport. Why they were there? To learn about eco and safe driving, and to be informed about courses on these topics, facilitated by the ARCHIMEDES project in Aalborg next spring. They were also there to have a great day with their colleagues.

It was the coldest morning in many months when the doors were opened for Driver's Day, hosted by the ARCHIMEDES project at driving course track near the city. The snow was swiftly removed, but the view of the vehicles cleaning up the tracks for the event, reminded the spectators, that the next couple of months can be very challenging for professional drivers.As the tracks were cleaned up, the outdoor activities began. All bus and truck drivers from the region had been invited through posters and flyers, and now a sample of them were there to try the activities. On the tracks you could try to manoeuvre a large truck on an icy surface, or steer other very large vehicles. A truck simulator was also on site, giving the participants the chance to experience different situations and guide them in eco driving. Aalborg also welcomed people the Health Bus, where the drivers could have their health checked.Inside the garage various presentations were on show, including good experiences from companies and individuals about saving fuels and participating in competitions to increase safety. In the middle of the floor visitors could try pass a track using alcohol-glasses, making the movements a bit awkward, to the amusement of the other visitors.However, the purpose of the day was to encourage the drivers to participate in courses on these topics during spring 2010. 40% of the drivers expect to participate in the courses in the spring, while 40% are considering it. The figures are based on a questionnaire handed out to the participants at the event.