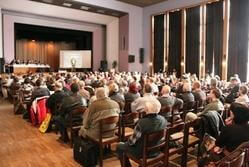 Approximately 200 citizens, experts in the field and general public gathered in the House of Culture to participate in the discussion about the draft of the New Master Plan for Usti nad Labem. Mayor of the city Jan Kubata and his deputy Jan Rericha attended the public hearing where participants could publicly present their comments and questions.

The discussion covered most areas of the transport field - a concept of a transport and technical infrastructure, landscape design,functional use of the land, main principles of organisation and coordination of construction work and other activities on the area of the city with regard to environmental and cultural values. The development of the Master Plan corresponds closely to the task 11.8.9 development of the Sustainable Urban Transport Plan for Usti nad Labem.Mayor Jan Kubata requested citizens to submit written proposals for changes directly to him or his councilors. He stated that he is surprised with how many people are interested in the problem. He was pleased to see that the public understands the importance of the Master Plan for the development of the city. The previous version of the Master Plan has been in place since 1996. In the past 14 years, dozens of amendments and changes have been added, mainly on request of private investors or land owners. This version is no longer sufficient for the present state of development of the city. Furthermore, the new Building Act restricts validity of the existing Master Plan until the year 2015. A new document needs to be developed. Guidelines for drafting the new plan will be approved by the City Council. It is expected that the new Master Plan will be approved in 2011 and will be valid for the following 10 years. The draft of the document can be examined at the municipality of the city, in the information centre or on the website of the city www.usti-nad-labem.cz