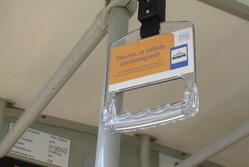 Throughout May and July 2008, the City of Tallinn was painted in “CIVITAS-colours”. Tallinn Transport Department with its partners carried out a dissemination campaign for the measures of the SMILE project. In order to work out the strategy and messages for the campaign we formed a conception, elaborated the key words, main messages and a produced a visual image. During the campaign we defined the main courses of action and the most important media channels.

Radio broadcast, outdoor and printed media were used. Both Estonian and Russian radio channels were incorporated into the campaign - Star FM and Kuku Radio for the former and Russian Radio and Sky Radio for the latter language group. In the radio clip a man’s voice described the troubles of private car: congestions, expensive fuel, insurance, problems with parking and policemen. To conclude the voice advises people to use public transport, because it is cheaper and faster during peak hours (thanks to CIVITAS SMILE measure: public transport priority system). Try at least once and you will get the proof yourself!Outdoor media campaigns were carried out by the public transport vehicles themselves (buses, trams, trolleybuses). City advertising pillars and bus shelters were also used. Vehicles were covered with campaign messages, inside the vehicles windows and handgrips were used, covered with text: “Thanks for choosing public transport”, but also with real factual samples, presenting the benefits of using public transport for public area and users also. Clips with campaign messages were showed on the screens inside the public transport vehicles.Print media covered all free newspapers such as Linnaleht Tallinn (City Newspaper) and local free newspapers in all 8 city districts (both Estonian and Russian). One of the goals of the campaign was to make a microsite in internet. Today, everyone can visit the site www.tallinn.ee/smile and get information about CIVITAS SMILE activities in the City of Tallinn.The first analyses provided by the evaluation team of SMILE-Tallinn surveys confirm that the campaign was successful and the public has noticed the elaboration of both CIVITAS measures in the city: Public transport priority system & Automatic stop calls and information in vehicles 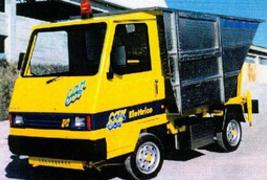