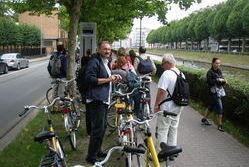 On 28 and 29 June the city of Ghent received a visit from 20 CIVITAS colleagues from six different countries for the CIVITAS cycling study tour. People from Zagreb (Croatia), Brno and Usti nad Labem (Czech Republic), Ljubljana (Slovenia), Tallinn (Estonia), Nantes (France) and Vitoria-Gasteiz (Spain) came to Ghent to take a look at the Ghent cycling life. Some of these cities are only starting to develop a cycling policy. Therefore, Ghent wanted to give them some inspiration for their future cycle plans.

After a short presentation on the cycling policy in Ghent and a demonstration of the online bicycle routeplanner, the participants took to their bikes and started cycling through the city. The participants were impressed with the way Student & Mobility and the Bicycle Depot are organised. MaxMobiel and their wide range of (trial) projects are also well supported and the large number of bicycles around the main railway station is always an impressive site to see. On the second day, the participants cycled along 20km of cycling infrastructure. Explanations were given on site when passing cycle underpasses, bicycle bins,   bicycle barometers, cycle bridges, cycle lanes, bicycle sheds and the cycle street. Also some new developments in the city of Ghent were shown. The weather was really nice both days and the participants were all very satisfied with the study tour. 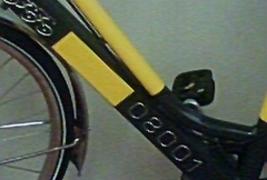 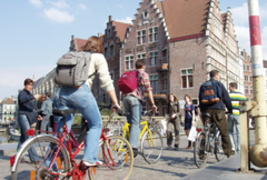