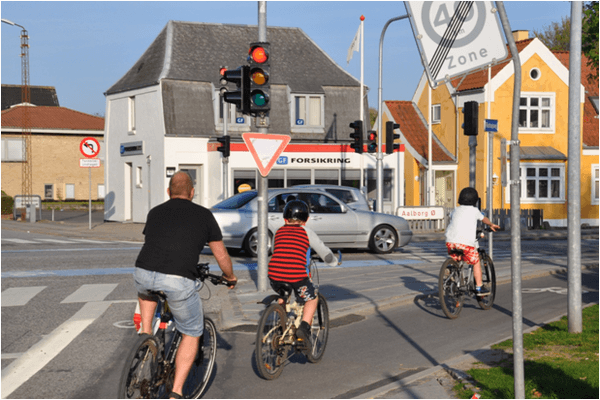 Users of the commuter cycling route between the city centre and the university have been asked what they think of the various features on the route. Replies are overwhelmingly positive.

A young man in a yellow reflective vest stops a cyclist on her way up the final hill before the university. It is early in the morning and time to find out, how people perceive the commuter cycling route from the city centre to the university. The route with all its features, such as improved cycling lanes, safer passing of bus stops, a short-cut shunt, green light priority, an air pump and a cyclist counter has been established in 2010 and 2011. Now it is being evaluated as the last step in the CIVITAS ARCHIMEDES project. The man in the vest explains the cyclist that the evaluation is made to see how cyclists perceive the new features of the route, and also to understand if anything can still be improved. This person is a keen cyclist, and only if the weather is really bad, she will use public transport, or stay at home. The next point on the questionnaire, says the man in the vest, is about your knowledge about the different features that have been installed along the route. The cyclist looks as if she is already ready to list all of the features she remembers. The shunt has already today shortened her travel time and when the air pump was installed last year, she instantly wanted to try it. Almost 65 percent of respondents in the survey know the shunt, and find it important. In a range between 1 and 10, the average of importance is 7.9. 35 percent of the respondents say that they use of the air pump at Hadsundvej and 18 percent use the air pump at Bonnesensgade. The average importance for the airpumps lies between 5 and 6 out of ten. After having told the man in the vest about the airpump and the shunt, the cyclist now lets him know, that the initiative that she thinks is the most important is that bike lanes have been placed behind the bus bays. This makes it more safe to use the route. And again, this cyclist is in line with other cyclists on the route. The importance level is measured to 8.9 out of 10 and nearly 50 percent giving it a score of 10. Earlier on the route, just a few hundred metres down the road, the cyclist was informed by the cyclist counter, that it would take her 8 minutes to reach the university at her current pace. The interview has delayed her a little. The man in the vest, ensures her that he has only one question left about the general satisfaction. The cyclist replies that she is generally satisfied with the cycle commuter route. 84 percent of all cyclists asked are satisfied with the route. As she continues on her way to the university, the man in the vest takes a new sheet of paper from his bag. 1 down, 291 to go, he thinks.