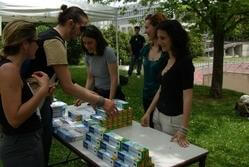 The objective of the day was to underline the national importance of cycling as an environmentally friendly mode of travel. During the day, streets were given cycle priority, and Perugia offered the largest ‘cycle network’ for the day of all Italian cities.The CIVITAS “RENAISSANCE” project had a central demonstration stand in the S. Giuliana Park, where the initiative culminated, and where all of the participating cyclists converged. The RENAISSANCE exhibition demonstrated the 15 Perugia measures, along with to those in the other four RENAISSANCE cities. In addition to printed material (a brochure with an overview on Renaissance project and two papers focusing on special measures) a low energy light bulb “labelled Renaissance” (provided with special project stickers) was handed out to the participants, as a symbol of a different attitude in using common resources. The RENAISSANCE team provided information and explanation about the local measures to local citizens.The event was also used to recruit a panel of ‘cycling citizens’ to get involved in the project and its evaluation and exploitation. Eighty people were recruited and informed about the project. These people include regular cyclists and those who are ‘experimenting’ with using the mode. These people will be continually informed about the project development and will be canvassed about their attitudes and mobility behaviour.