Cycling day for children in Szczecinek 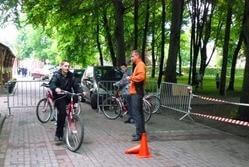 In Szczecinek, it seems that wherever children play, they play with bikes. This year, when Children’s Day arrived with a lot of sunshine, the whole CIVITAS REANAISANCE family was ready to entertain (and teach) its youngest members.

The venue was one of the most beautiful places in the town - the park on the lake. Bikes normally used in renting points this time were waiting for young competitors. A special race track was prepared and more than one hundred competitors started racing. A lot of fun, but also a lot of information was given regarding the advantages of using the bicycles and safe ways to travel to school.Children’s Day was one of the many events being developed as part of RENAISSANCE campaign to promote the use of public transport and cycling. In Szczecinek, one of the most important target groups is school children. Cycling and walking to school has to be done on safe roads - if parents don’t feel their children are safe between home and school, they won’t allow them to go without an escort. It is the case in Szczecinek, that journeys to most schools require children to cross the street. It is very important to teach pupils how to behave during their way to/from school.