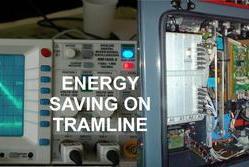 Many people believe that the tram belongs to the past, but in reality it is an effective and high capacity mode of transport, which doesn't get stuck in traffic or represent a direct source of pollution for the city.

The trend in the recent years is to modernise and expand the tram transport mode. With the MODERN project support, Craoiva proposed to technically upgrade nine old trams belonging to the Craiova Public Transport Company. These trams were equipped with an electronic device called chopper - to help reduce approximately 40 percent of the electricity consumption.The technical solution for anti skidding of the driving wheels is an innovative one developed by IPA Craiova (one of the project partners) and has been proposed as a patent at OSIM (State Office for Inventions and Trademarks).Starting with the technical solution, it was proposed that the chopper should be placed on the old trams in order to manage and streamline the energy consumption. The team of engineers developed the chopper electronic project and then the prototype. The acquisition procedure ended in January 2010 and the winning company was assigned the contract in accordance with the rules on public procurement. As stated in the specifications, the beneficiary RAT Craiova and the subcontractor scheduled the implementation actions in order to balance the available resources and time needed for construction and installation. The two sides decided that the implementation will be done in series of three choppers by the end of this year.The first series of three trams, which came into the modernisation process has already been made in the workshops in preparation for the installation of the choppers. It is estimated that the first trams equipped with chopper electronic systems will be ready in three months. After completion the trams will be tested and monitored when running in normal working conditions. In parallel, the next series of three trams will enter the modernisation process.