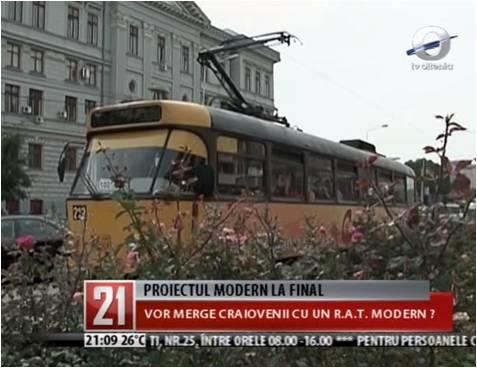 Craiova promotes the results achieved throughout the MODERN project through a series of talk shows on television.

After four years of Craiova's experience in CIVITAS, it's the right time to understand what this project has meant for the city. At this stage, dissemination efforts focus on producing several TV shows that include video presentations that highligh a broader view of the project and of its numerous achievements. To this end, a TV show cycle has started in June and will last until October. Representatives of the local CIVITAS partners have been invited to offer input on the topics under discussion, to share their experience and opinion related to the MODERN project within several talk shows. Three shows of  30-45 minutes on three different TV channels have been broadcast so far. The remaining three shows are scheduled for September-October.The main topics of the first three TV shows were the integrated e-ticketing system and the new freight distribution scheme in the downtown area. Here are some of the questions discussed during the talk shows: How have other cities implemented an e-ticketing system? Is it necessary to extend e-ticketing to the entire public transport system? What are the benefits of such a system? Why is a goods distribution scheme needed in the city center? Is there a European policy in this regard? What would the results of such schemes be? Are there other solutions to get the same results? The TV shows were preceded by a video campaign. A promotional video clip about CIVITAS MODERN ran two weeks on two large screens in the Prefecture Market. The same spot ran also for two weeks in September before the second series of the TV shows started. The video recordings of TV shows (only in Romanian) and the video material (in English) are available on the project website.