Concert for winners of cycle to school competition in Aalborg

For the last two months, the City of Aalborg has been running an innovative campaign to get school children to cycle to school. Fifth to seventh graders from 17 schools competed in the battle to win a concert with X-Factor finalists Alien Beat Club.

In place of traditional posters and leaflets, interactive mobile phone and internet communication was chosen on pupils’ own terms. These interactive channels allowed children to be actively involved in the competition. In addition, the competition experimented with harnessing pupils' imagination, by making use of a storyline and a set of characters. As a part of this storyline, the mean character Roland tried to the sabotage the competition by stealing the tickets for the concert. By solving seven different riddles, the children had to find the tickets again. The competition led the children through a treasure hunt of riddles, challenges and games - all to inspire pupils to cycle. The children were challenged to hop on their bicycles and follow bicycle paths for clues and traces in order to collect points. After a hard battle, it turned out to be a tie between school children at Philip School and Kærby School. The prize of the competition is therefore a concert for both schools. While the competition was shrouded in mystery, the goal of the campaign was clear as day: For the sake of safety and health, the City of Aalborg seeks to get school children to cycle to school and thereby, to reduce the number of children being driven to school by car to maximum 10% in urban areas and 20% in rural areas before 2020. The participation of the pupils in the cycle to school competition was a success. On October 29, the two winning schools celebrate the great result with the Alien Beat Club concert. It is expected that approximately 500 school children will take part in the concert. 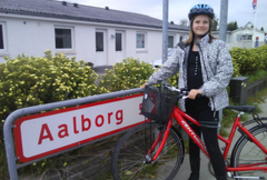