Commuters and tourists hop on the City Bike 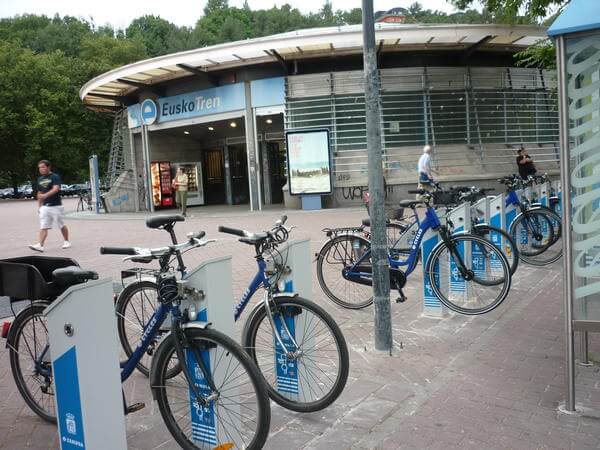 DBIZI, the city-bike scheme in Donostia-San Sebastian that has been implemented within the CIVITAS ARCHIMEDES project, has proven to attract users for both day-to-day mobility and leisure.

After a pilot test with five dispatch points, the municipality of Donostia-San Sebastian has permanently implemented the city bike scheme initiated in 2008 and ectended it to nince dispatch points along the CIVITAS corridor where 150 public bicycles remain available to registered users between 7:30 and 21:00 throughout the year (Only on three days a year the service is closed). Since its implementation the system has attracted a steadily increasing number of users each year, reaching over 5,000 subscribers in 2011 (about 1,400 more than in 2010). The number of trips has grown rapidly, as well. In 2011, more than 167,500 trips were made using DBIZI (averaging 4.6 daily uses per bicycle), which constitutes a 64 percent increase compared to 2010. This increase follows a  50 percent increase in 2010 compared to the previous year (2009). In 2010, some 102,000 trips and an average of 2.9 daily uses per bicycle were recorded. Most trips made using DBIZI have a duration of less than 15 minutes and are made during weekdays (Monday to Friday). This indicates that the service is mainly used for daily mobility purposes within the city, mostly by people who do not cycle regularly for occasional unplanned trips and/ or to access other transport services (i.e. as part of an intermodal trip). Yet, leisure trips also play a significant role. The Municipality of Donostia-San Sebastian recognised this and opened the service to tourists (with certain conditions to prevent a lack of bicycle availability for locals during peak hours in the morning). The same year, already 1,148 tourists made use of the offer to use the service for one day, three days or for one week. In 2011, the number of visitors using the system reached 1,863 - an increase of 62 percent. DBIZI is encouraging people to use their own bicycles more often. It has contributed to a 25 percent increase in the number of bicycle trips recorded in the city since the previous year.