Clean urban transport: the European Commission wants to build on the results of the CIVITAS programme 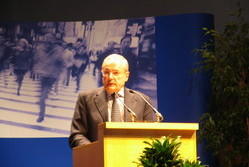 Nantes in France was hosting the third annual meeting of the cities taking part in Europe’s CIVITAS programme, an initiative aimed at developing alternatives to private car use in towns and cities in order to reduce congestion and pollution. Vice-President Jacques Barrot, the Commissioner for Transport, spoke at the meeting to reaffirm the Commission’s support for the programme and announced his intention of sharing positive results with any interested cities.

Addressing the CIVITAS network representatives, Mr Barrot declared: “The pioneering experiments launched by the 36 CIVITAS cities provide the essential foundations for building an ambitious urban transport policy. Europe needs to help cities deal successfully with the growing congestion and pollution caused by urban transport.”The Commission plans to promote the exchange of good practice and innovation to ensure that urban transport can meet the challenges of the twenty-first century in areas such as the role of the car in the city, the transport systems necessitated by the ageing of society, the environmental impact of urban transport and the urban transport applications of new technologies, such as Galileo.The Commission will also continue its financial support of the CIVITAS programme under the seventh Framework Programme for Research and Development (2007-2013). To date, the Commission has provided €100 million in cofinancing. The cities participating in CIVITAS are tackling congestion and pollution by introducing innovative planning schemes, employing new technologies to increase energy efficiency and using alternative fuels.Thirty-six European cities currently receive aid from the Commission through CIVITAS. Projects in the first wave (Aalborg, Barcelona, Berlin, Bremen, Bristol, Bucharest, Cork, Gdynia, Göteborg, Graz, Kaunas, Lille, Nantes, Pécs, Prague, Rome, Rotterdam, Stockholm and Winchester) are due to be completed in early 2006. The projects for the cities of Burgos, Debrecen, Genoa, Krakow, La Rochelle, Ljubljana, Malmö, Norwich, Odense, Ploiesti, Potenza, Preston, Stuttgart, Suceava, Tallinn, Toulouse and Venice will continue until 2009.As of 2007, the Commission intends to select further groups of demonstration cities, with special emphasis on cities in the new Member States and the accession countries, which are witnessing rapid increases in the rates of car ownership and a falling-off in the use of public transport. Local authorities therefore need help to develop and test appropriate transition strategies designed to maintain high rates of public transport use, walking and cycling. (Press Release, 3rd November 2005, Brussels)