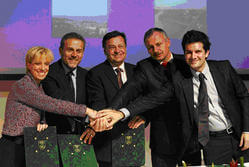 CIVITAS ELAN is a large and ambitious project of great strategic importance to its project partners and funding institutions. The mayors of the cities of Ljubljana, Gent, Zagreb, Brno and Porto have agreed to a common mission statement: “To mobilize our citizens by developing with their support clean mobility solutions for vital cities, ensuring health and access for all.” CIVITAS ELAN has started on the 15th of September and will implement 68 measures in total. It will last for four years about € 29 million are available for the entire project.

Ljubljana, which already participated in CIVITAS MOBILIS (CIVITAS II) as a learning city, is the project coordinator of CIVITAS ELAN. Furthermore, there is one learning city from the New Member States, Brno. Zagreb, from a candidate country thus integrates the CIVITAS Initiative in the enlargement process. The work plan addresses topics of specific interest to cities in the NMS. Through CIVITAS-ELAN three new countries, Portugal with Porto, Croatia and Belgium with Gent will be put on the CIVITAS map. All 5 CIVITAS ELAN cities are committed to becoming ambassadors in their countries.Altogether, the CIVITAS ELAN project comprises 37 partners:10 come from Ljubljana, eight from Gent, seven from Zagreb, two from Brno, eight from Porto and two consultancies.The five cities are cooperating within the CIVITAS Initiative on the basis of a clear set of common objectives, based on the principle of “putting the citizen first”. For each of the CIVITAS policy fields, a common set of headline objectives and corresponding project goals have been agreed, and the cities have developed a program of 68 measures in total, which are described in detail, including concrete targets.The CIVITAS ELAN cities cover a range of sustainable and auspicious measures like:Modernization of the cities’ vehicle fleetsThe purchase of hybrid busesThe introduction of alternative fuels in public transportRestriction of parking and new use of public spaceIntroduction of an electronic system for ticket paymentsProduction of a participatory model in mobility planning and establishment of a forum for the exchange of information and opinionsIntroduction of minibuses for transporting special needs groupsIntroduction of a bike rental system and internet support system for car sharingImprovement of information about public transport services via mobile phones and other IT servicesEstablishment of new mobility centers as a central transport information pointThe kick-off meeting on the 27th to the 29th of October 2008 took place in Ljubljana. In addition to the over 80 representatives from the CIVITAS ELAN partners, high-ranking representatives from the cities followed the invitation to Slovenia as well. The CIVITAS ELAN team welcomed Mr. Milan Bandić, Mayor of Zagreb, Mr. Zoran Janković, Mayor of Ljubljana, Mr. Ladislav Macek, Deputy Mayor of Brno, Mrs. Karin Temmerman, Alderman for Urban Development, Mobility and Living in Gent and Mr. José Sérgio Moreira Brandão on behalf of Mr. Rui Rio, Mayor of Porto.The first training workshop also on financial issues took place in Ljubljana about.