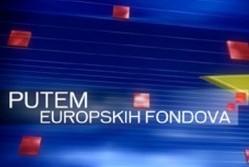 "On the road to European funds" is the result of a joint initiative of the Central Office for Development Strategy and Coordination of EU Funds and the Delegation of the European Union to Croatia, as well as cooperation with the Croatian Radiotelevision.

The show informs and educates about EU funds and programmes in the Republic of Croatia, as well as institutions involved in the preparation and implementation of these funds. Croatian beneficiaries involved in a wide range of EU-funded projects talk about their experiences alongside the results and impact these projects have had within their organisations. In addition, information on all open tenders and relevant websites are presented. The first show, which was broadcast recently featured the CIVITAS ELAN Zagreb project and its main target group – the citizens of Zagreb. The story covered information about partners, project results up until now and a couple of interesting stories on mobility in Zagreb from cyclists, public transport users, with a particular focus on elderly people who frequently use public transport.