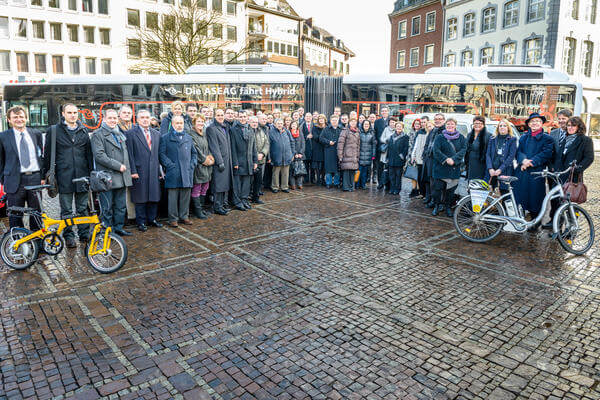 The CIVITAS DYN@MO Kick-off meeting was a big success, bringing together political leaders and project partners from all four participating cities together to collaborate, learn, and establish the solid foundation of what will surely be a fruitful partnership.

The official kick-off of the CIVITAS DYN@MO project took place on 28-30 January, bringing together the cities of Aachen, Germany; Gdynia, Poland; Koprivnica, Croatia; and Palma, Spain. The event brought together over 60 sustainable urban mobility experts and was hosted by the City of Aachen. On the first day, participants were taken on a guided city tour, named “Aachen-From Charlemagne to IT Excellence.” Participants boarded the brand new Citaro G Bluetec Hybrid bus, the first time a bus of its kind would drive the streets of Aachen. Once participants arrived at Aachen´s town hall, a collection of electric powered vehicles were displayed for participants to familiarize themselves with. Later, a press conference was held in Aachen’s town hall with all of the mayors of the four partner cities. After a warm welcome and introduction from Marcel Philipp, Lord Mayor of Aachen, the political kick-off meeting on January 28th started with a video message by Michael Groschek, the Minister of Building, Housing, Urban Development and Transport for the German state of Nord-Rhein Westphalia. Mathieu Gorsch, Member of the European Parliament and its Transport Commission provided the key note speech. Mark Major, European Commission Directorate General for Energy and Transportation, gave an informative speech on EU policies towards low-carbon urban mobility in Europe and the role CIVITAS projects like DYN@MO serve in realizing and achieving these goals. Closing the speeches for the day was Gisela Nacken, Commissioner for Planning and Environment for the City of Aachen, with her introduction to CIVITAS DYN@MO. Afterwards, a panel of leaders and experts participated in the DYN@MO Round Table Discussion – “Mobility 2.0 Innovation in European Cities.” The second day of the consortium meeting was the operational kick off, starting with a welcome address by Eckard Larosch, with the City of Aachenfollowed by a presentation on the legacy of CIVITAS by Gerhard Ablasser with the City of Graz, Austria. Georg Werdermann, the project coordinator for the City of Aachen, gave a more detailed introduction into the CIVITAS DYN@MO project. Afterwards, each city presented their specific project measures. The second half of the day contained more detailed presentations on the specifics of CIVITAS DYN@MO and the important role that project evaluation and dissemination play in ensuring the project’s success. On the final day of the event, the consortium meeting focused specifically on the financial and project management issues of DYN@MO. For more information, contact: Bernd Decker, Project Manager, Rupprecht Consult (b [dot] decker [at] rupprecht-consult [dot] eu) Kirsi-Marja Lonkila, Project Dissemination Manager, Union of the Baltic Cities (kirsi-marja [dot] lonkila [at] ubc [dot] net)