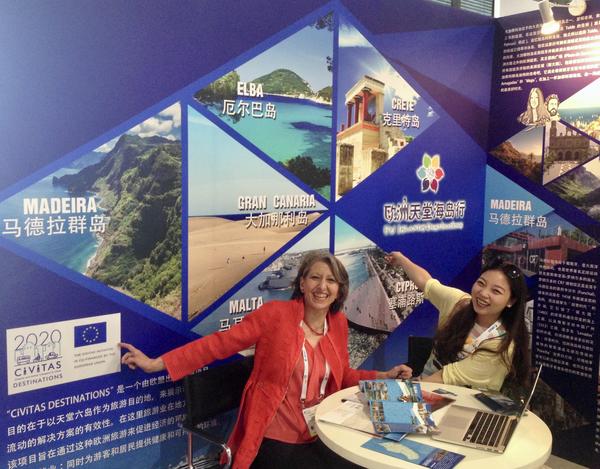 From 10-12 May, the Civitas DESTINATIONS project had a booth at ITB China 2017, which took place in Shanghai. Over 600 exhibitors were present at ITB China's first edition.

DESTINATIONS presence at ITB extended far beyond its stand. Two press boxes in the Media Centre relayed information on the project continually, while a press conference on the second afternoon gave an opportunity to communicate project work to journalists.

Many attendees commented that their preferred mode of travel around DESTINATIONS sites would still be private transport, in spite of the initiatives to be found there. Yet this trend may change over time, particularly as younger travellers start to visit these destinations.

With several of the sites easily accessible from various European airports, direct connections were also not considered to be very important.

By participating in ITB China, DESTINATIONS helped those involved in outbound tourism from China begin to understand the mobility and urbanisation needs of European tourists when they come to China.

ITB is the number one tourism trade fair in the world, with ITB Berlin the first ITB convention to be established (it is still held annually). Due to this, the ITB China 'brand' has developed associations with the European Union.

Across six European touristic sites, DESTINATIONS is developing intelligent, sustainable mobility measures and transport solutions for tourists and residents alike. The project also has strong  links to China, with four follower cities located there. All ITB-related work was coordinated by the project's dedicated China Coordinator.

Find out more at the DESTINATIONS project page.