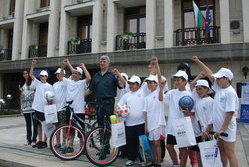 World Environment Day was the perfect occasion for City of Gorna Oryhovitsa to promote CIVITAS. During the day, several events were organised in the city with a large participation of school children.

Following the invitation received from the CIVITAS RENAISSANCE team of Gorna Oryahovitsa, almost 300 people attended the events which were organised throughout the day. The main events were dedicated to children and they consisted in a bicycle contest and a competition for best drawing illustrating clean transport. Both competitions were open to several age groups. All the participants received CIVITAS T-shirts and hats. The main prize for each of the competitions was a CIVITAS bicycle. The children's enthusiasm was so great that there were children aged 4 or 5 who were registered and received special prizes for being the youngest participants.During the day, the main street of the city was closed and different small events were organised in the city. A CIVITAS info point was arranged in front of the Municipality building - leaflets, posters and banners been exhibited. The parents of the children involved in the competitions had the chance to find out more information about the CIVITAS initiative and the city's involvement in the CIVITAS RENAISSANCE project. Different gadgets were offered to the children and to their parents. The CIVITAS day in Gorna Oryahovitsa was a very successful public event. A DVD with the images from the event and explanation of its nature and scope has been produced. The DVD of the CIVITAS day in Gorna Oryahovitsa has been already distributed to other Bulgarian cities in order to promote the CIVITAS experience of the city in organising public events.