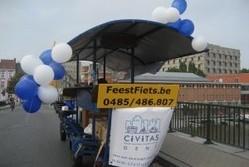 During the weekend of 19 and 20 September 2009, the CIVITAS GENT Team crossed the city centre on a huge bicycle. Team members and measure leaders gave their best to spread the CIVITAS message amongst Gent citizens. Flyers, balloons and the famous CIVITAS piggy banks were handed out. People were also invited to cycle along for a while.

The message behind the piggy bank was simple: with each kilometre you cycle instead of driving the car, you can save more than 25 euro cent.The bicycle was so huge that the CiViTAS visibility and branding was optimal. Twenty people could sit on the bike, twelve had to push the pedals. Children were very fond of the piggy bank and they taught their parents on how to save money! 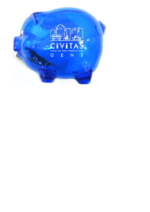