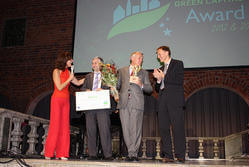 Following Stockholm’s success in 2010, fellow CIVITAS cities Vitoria-Gasteiz and Nantes have been named as winners of the of the European Green Capital award for 2012 and 2013 respectively.

The European Green Capital Award winners for 2012 and 2013 were announced at the inaugural European Green Capital Conference in Stockholm, Sweden, on 21 October. Janez Potocnik, European Commissioner for the Environment, revealed the winners: Vitoria-Gasteiz, Spain, and Nantes, France. Stockholm, Green Capital for 2010 and CIVITAS I city, has achieved some important successes in the field of sustainable mobility. Between 2005 and 2006, congestion charging reduced city traffic by 22 percent, while clean vehicle strategies increased their share of the car-fleet stock by 8 percent. Vitoria-Gasteiz, of the CIVITAS MODERN project, impressed the judging panel with a long-term set of coherent policies and actions at local level, which include its programmes to develop bicycle and pedestrian mobility. Nantes, CIVITAS I city and CIVITAS City of the Year at the 2009 Awards, caught the panel’s attention with its aim to cut its CO2 emissions by a quarter by 2020. Investments in new tramways, bus services, electric cars and bicycle infrastructure are foreseen as part of its policies.In the words of Commissioner Potocnik, Cities are the places where most Europeans see environment policy in action; and where environmental decisions matter. I congratulate Vitoria-Gasteiz and Nantes on the work they have put in to improve the environment and quality of life for their citizens.”