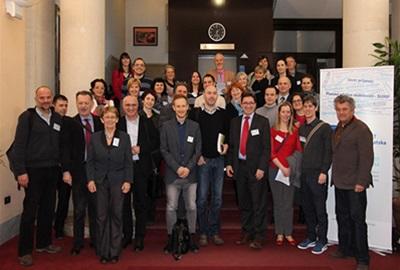 More than 50 participant from Slovenia and Croatia, as well as from other SEE countries gather at the event organised by CIVINET Slovenia-Croatia network in Croatian city of Rijeka

General Assembly of the network CIVINET Slovenia-Croatia was held in Croatian town of Rijeka on February 20, 2015. Some changes in the Statute were adopted and the 2015 Statement was issued by the Political Committee. Three good urban mobility examples from Rijeka were presented (Rijeka's promenades, BikeRijeka and new environmentally friendly public transport fleet). Examples of bike projects and bike transport challenges were also presented by colleagues from Slovenia, as well as project on counselling for personal mobility. Representative of City of Koprivnica presented newly established SUMP Competence Centre for South Eastern Europe. After the event, more than 50 participant from Slovenia and Croatia, as well as from other SEE countries had a chance to ride the busses on natural gas and walk along the part of promenade.