Which transport mode needs more road space: the private car, the bus, or cyclists and pedestrians? As part of “without my car day”, 120 citizens of San Sebastian set out to answer this question on a central boulevard along the La Concha beach.

The participative and highly visual event started on the 19 September at 10.00 when the citizens placed their 86 cars in two rows on the Paseo de la Concha. The total length of one row was almost 240 meters and the two rows together occupied 1260 m2 of road space.After moving the cars out and clearing the street, the same 120 citizens drove in an 18 metre articulated bus. The bus was photographed while it occupied only 45 m2 of road space. In the last picture the citizens can be seen as the human beings they are: as pedestrians and cyclists.The photos and videos taken during the event clearly show the big difference in the use of road space between the private car and the other modes. The event was covered by the regional newspaper and appeared in the Basque regional news. The visual material will be used for a wider CIVITAS awareness campaign to promote sustainable modes and to further support the 18 local CIVITAS measures. 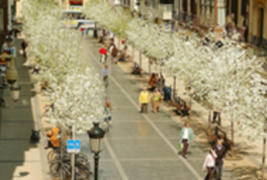 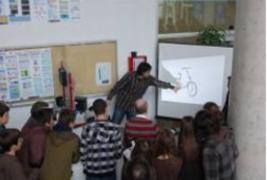 Mobility management for the university campus 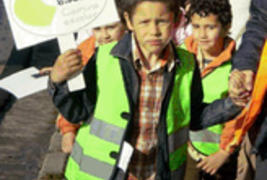