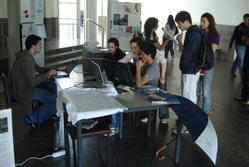 A carpooling marketing campaign ran from 20-30 April in Porto. During the ten days carpooling was promoted in a variety of ways in a bid to raise awareness and to encourage Porto’s citizens to log on to the online platform created specifically for those interested in carpooling.

The campaign was run in the Engineering and Medicine faculties in the University of Porto. The results show that the campaign was a resounding success! Almost 500 users subscribed to the platform (www.rotapartilhada.com). This was only the first phase of the carpooling dissemination. A second phase is foreseen in mid-September, to coincide with the start of the new school year.