Bicycle training for children in a real traffic environment, Graz 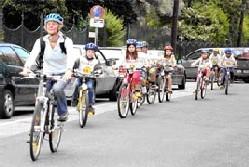 In CIVITAS Trendsetter Graz launched a school project which aimed at conveying the basics of road traffic to the pupils. What was special about this cycle training was that the training sessions did not take place in safe areas but in a real traffic environment. More than half of the children who participated in the training were able to improve their cycle skills after even one training session. A study on the long-time effects of the cycle training between 2002 & 2005 was also carried out: 73% of all children partcipating in the training still use the bike as a regular means of transport.

Graz, the capital of the Austrian province of Styria, is a city of cyclists. Children, who use the bike for going to school and in their leisure time, make up a large proportion of cyclists. In Austria, however, only children aged 12 and over are allowed to ride the bicycle in real road traffic (without adult escort) unless they take a non-compulsory cycling exam at the age of 10. These exams usually take place in safe training areas where there is no real traffic. The children don’t get used to cycling in a real traffic environment. Therefore in 1994 a school project was launched, which aimed at conveying the basics of road traffic to the pupils. What was special about this cycle training was that the training sessions did not take place in safe areas but in a real traffic environment!Safe traffic behaviour – learning it the easy wayThe cycle training starts with a first test in the school courtyard: The children’s psychomotoric abilities are tested. Only after this first test the cycle training starts in a real traffic environment: The children practise riding the bike in real traffic conditions under the instructions of a trained team of cycle coaches. Before the start of the training sessions children usually believe that they have to stop and make way for cars as soon as a car approaches them from behind. The cycle training teaches them to keep in lane well visibly, to keep a distance from the curbs and not to be afraid of occupying space on the road. The children practise in areas with reduced traffic and on cycle paths, they learn how to pass cross roads and turn left at junctions. The training helps to enhance the children’s self-confidence and makes them responsible and conscientious road-users. After the practical training sessions the experiences made during the training are discussed and consolidated in class.ResultsMore than half of the children who participated in the training were able to improve their cycle skills after even one training session. Another advantage is the “hands-on” transfer of knowledge in a real traffic environment. The children also learn that the bicycle is an environmentally sound mode of transport. This process of raising awareness may be extended to the parents who sometimes start riding the bike again. A study on the longtime effects of the cycle training was also carried out: 73% of all children who participated in the training in 1994 still use the bike as a regular means of transport.Success Story After 10 years the bicycle training was extended finally to all the children in Graz (81 school classes and more than 1750 children). Teaching materials for cycle trainings, quizzes and training certificates was also be developed. But the biggest success happened in February 2004: The bicycle training received the first place of the Shimano Cycling Concept Award 2004.