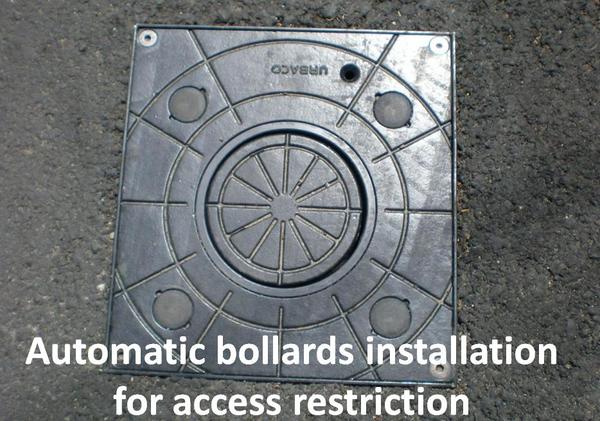 The Municipality of Craiova has just begun the installation of retractable barriers to manage access to the downtown area.

Craiova has taken another step towards a city with less traffic thanks to the installation of retractable barriers at the perimeter of the future historical center; this area will be used by pedestrians only in the near future. The bollards system was purchased by the municipality through the MODERN project. The new system is going to replace the old one, where physical barriers were installed each time there was the need to, especially on weekends and for special events. The pneumatic retractable pillars will be operated by a remote control. They can open the road within a maximum of 7 seconds. Once the car entered, the pillars will return upright, blocking access for other vehicles. By construction, the bollards can support traffic of up to 100 tones and withstand extreme temperatures ranging from -25°C to +45°C. The bollards system will allow the municipality to give selective access to the central area of the city. Residents’ cars and freight vehicles will have access in the protected area. Ambulances, the police, fire trucks, and sanitation vehicles also have access. This action was announced on the municipality's website and was taken over by several local and regional newspapers or online publications.