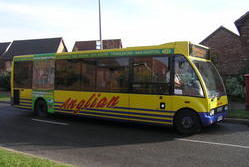 Anglian Bus is determined to minimise the environmental impact of their operations. By using biodiesel in their buses, Anglian is helping to reduce the emissions of carbon dioxide that are responsible for global warming and climate change.

Just one bus can emit up to half a kilogram of carbon dioxide for every kilometre it travels. Anglian substitutes some of the diesel it uses with biodiesel. Biodiesel is made from plant oils such as rape seed oil by a simple chemical process - often after the oil has already been used first in some other way - in the preparation of food, for example. The biodiesel used in their bus is made from used vegetable oil. Because plants absorb carbon dioxide when they grow through the process known as photosynthesis, fuel made from plant oil is effectively recycling carbon dioxide already in the atmosphere rather than adding new CO2. Hence using biodiesel does not add to carbon dioxide in the atmosphere (apart from a small component associated with the energy used in the manufacture of the biodiesel). 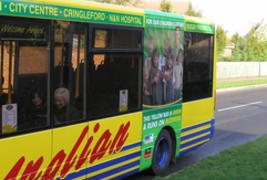