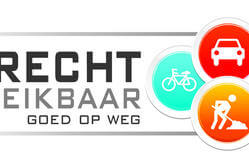 The MIMOSA project Accessible Utrecht stimulates companies in and around the city to help keep the city accessible, by providing their employees with free public transport passes. Over 20,000 are now being used, limiting the inconvenience caused by construction work in the city centre and on the highways surrounding Utrecht.

As a result of ongoing construction work, the accessibility of the city is affected. Within CIVITAS MIMOSA, “Accessible Utrecht” offers an alternative to traffic jams, by offering a personal Public Transport pass that can be used for daily commuting trips. Employers can purchase the pass at an attractive price for its employees who work in the city of Utrecht or the bordering city Nieuwegein. These employees can then use public transport such as bus and train services and public bicycles for free. By June of this year, over 400 companies already offered their employees this alternative transport, far more than was expected. This has resulted in the sale of over 20,000 “Accessible Utrecht” Public Transport passes. This means the project is well on track to meet the aims set within CIVITAS MIMOSA. Another aim is a reduction by 2,000 to 4,000 of cars on the roads in and around Utrecht during peak hours. This goal has already been reached: the amount of passes handed out represents 3,700 fewer vehicles during rush hours. This information is based on research showing that around 40% of the PT-pass owners are former car drivers. A large majority of them use the pass two to five times a week.These figures show that employers see the benefits of the pass. It offers a solution for parking problems, and fewer cars enter the city. The good results significantly contribute to the goals of the “Accessible Utrecht” programme and form a positive starting point for discussions about the future of “Accessible Utrecht”. 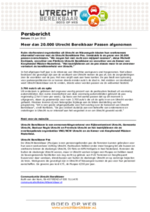