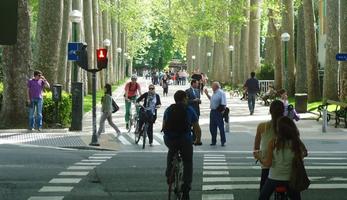 Vitoria-Gasteiz is eager to tackle the growing car traffic and revive the city’s walking and cycling mobility. The municipality planned an ambitious network to boost the pedestrian and cycling mobilit. This comprehensive and accessible network connects the entire city.

The objective of this measure was to create a new mobility framework for cyclists and pedestrians in the city of Vitoria-Gasteiz, based on the superblocks model (see measure 05.01 to know more about superblocks). Specifically, the objectives were:

In 2009 the Cycling Mobility Master Plan of Vitoria-Gasteiz was approved. Following that Plan, the actions performed within this MODERN measure have helped to improve the situation. Cycling infrastructure has reached a connectivity level that people is daring more and more to use their bicycles daily.

During the measure’s duration, a technical report with an in-depth analysis for the pacific coexistence of pedestrians and bicycles in the main pedestrian areas of the city was completed.

During the third year of the MODERN project, a technical report with an in-depth analysis for the bike routes signalling was prepared. The idea was also to drive proposals in order to improve road safety in the bike infrastructure. Besides, a detailed plan and costing for 4 new bike paths of the main network was developed. These new bike lanes, with a total length of 7.5 km, were aimed at improving the connectivity to west, east and south.

During the fourth year more bicycle lanes and pedestrian spaces were created.

More specifically related to pedestrian mobility, during the duration of the CIVITAS measure a draft of the Pedestrian Mobility Master Plan was produced. All the public works related to superblocks implied the redesigning of all the public space reserved for pedestrians.

The two main projects related to pedestrian mobility were the Alhóndiga project and the demonstrative superblock creation. The Alhóndiga project (this action is not included among the objectives of this measure) was one of the strategic projects programmed for the city in the period 2009-2011, designed to support small retail outlets, but also to improve the pedestrian mode in the zone. Finally, only parts of this project were fully implemented, with works done in some short streets. On the other hand, the creation of the demonstrative superblock prioritized the pedestrians as the main mobility mode in the zone.

Regarding the communication, dissemination and participation activities, among the multiple activities executed in this field, it is worth mentioning the following ones:

The main results in this measure were the following ones: 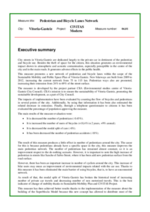 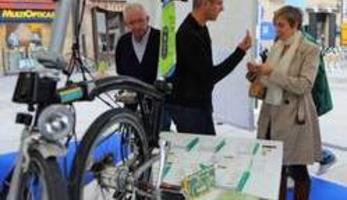 Vitoria-Gasteiz has launched a bicycle registration system. The system consists of a database containing information about bicycles and their owners, which aims...