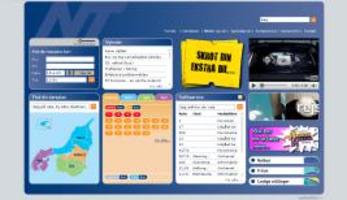 Feedback from citizens has shown that there is a growing demand for more travel information in Aalborg. In response, the city is going to further develop two existing web services, www.nordjyllandstrafikselskab.dk and www.trafikken.dk/Nordjylland/Nordjylland.asp.

The main objective of this measure is to:

This measure concerns a further development of two existing traffic information websites in order to give travellers better and more reliable information and by giving access to the right information influencing the traveller choice of modes of transportation, transportation time and route. The two web pages that have been enhanced are www.NordjyllandsTrafikselskab.dk and www.aalborg-trafikinfo.dk (renamed to Trafkken.dk/Nordjylland). This project has contributed to the following:

Evaluation results show, that there were respectively 88% and 93% more users on the websites the first year after the modernisation and that these numbers have continued to rise in the following years.

When looking at figures on month level, two facts can be observed: First, an increase in numbers of users of ~50% monthly in a normal situation. Secondly that number of users is heavily affected by unusual traffic situations as, for example the periods of heavy snows falls that took place during the evaluation period, which resulted in the web sites being up to 600% more used in these months.

The awareness of one of the web pages which has been assessed seems to be at the same level as in 2006 where the baseline was created. However, since the modernisation of the web page and the change of domain, more users are visiting the page. This indicates that more people are aware of the place where to get their traffic information.

The main purpose of this measure was to give update and reliable information to the road users and this objective has been fulfilled. People are using the web pages more in the normal situation and especially in situations when conditions vary from normal.

It has not been possible to isolate any possible change in modal split based on this measure, from other changes as for example the influence of the financial cries on the modality level or modal split.

No major barriers have been met in this measure. It is concluded, that cooperating with more stakeholders as the Danish Road Directorate, the Police and the Public Transport Authority at the same time can be a driver, leading to a better services, and a barrier making the implementation process more complicated and time consuming.

Another conclusion is that it is hard for the decision processes in a public body – especially working in a fixed EU project - to keep up with the pace in the technological development.

As a consequence, two of the main recommendations at the same time is to “Establish a comprehensive information services ready to use whatever medias the travellers are preferring at the moment.” And to “…Give private companies access to the data collected by the authorities to help spreading the information to the end users by more channels” 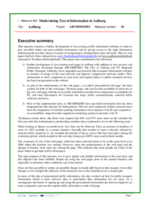 The City of Aalborg and the Danish Road Directorate have formed a partnership concerning online traffic information in Northern Jutland. In the future more municipalities...