E-ticketing and other improvements to public transport 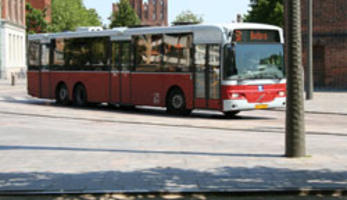 Changing the trend towards a growth in car use at the expense of public transport is one of the greatest challenges for mobility planning in Denmark.

The objectives of the measure were to:

Between January 2006 and October 2006, a campaign was launched to raise awareness of public transport in Odense and to create a better image for the system. Posters were displayed encouraging citizens to use the buses and a new website was created giving information about timetables and prices. In summer 2006, water bottles were handed out featuring the address of the new website, and in autumn 2006, 5,000 umbrellas were handed out also promoting the site.

An electronic communications campaign was also implemented. In January 2008, an sms ticket scheme was launched, allowing passengers to pay their fares by mobile phone and to show the sms to the bus driver as proof of purchase. The scheme was developed in cooperation with the phone operator TDC and passengers are charged for their bus travel on their phone bill. Passengers can also use WAP to download actual timetables. Real-time information screens were installed in five locations in the city. A bus priority system based on GPS was also installed.

A total of 5,001 sms tickets were sold per month during the first year. The system was taken over by the regional transport company FynBus and achieved a daily sale rate of 178 tickets, representing 4 to 5 percent of total sales. The creative use of mobile phones was appealing to young people and was a cost-efficient way of using people’s existing devices for new uses.

The four information screens at the bus terminal are each used on average 5,588 times per month.

The bus priority system increased travel speeds by 3 percent in the evening and 1 percent during the day.

A 2006 survey involving 402 citizens showed that 87 percent of users of the website were happy with its accessibility. 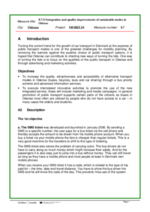 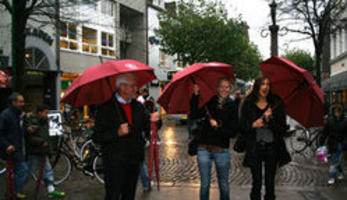 Singing in the rain

Most of the time you wouldn’t feel like singing in the rain. But now 5000 people in Odense can feel free to do so under the shelter of their new umbrellas. As...