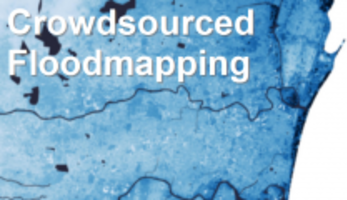 Time needed for the set-up of the tool depends on level of knowledge of web applications. Some data / settings will need to be adjusted in source code to local context, details: https://github.com/osm-in/flood-map

Support may be needed depending on level of knowledge of web applications and front-end developer skills.

Flood risk zones (if available) and topographic data, the rest of data will be crowdsourced.

The Crowdsourced Floodmapping tool helps to identify flooded areas. It was developed in the process of Mapbox Bangalore creating a crowdsourced visualisation of Chennai’s flooded streets after the strongest monsoon rains of the century hit and disrupted the lives of over 6.7 million people. No up-to-date map of flooded streets was available to residents and local media to measure, analyse and show the degree of devastation.

The easy-to-use digital tool built on top of OpenStreetMap lets users zoom in, discover which streets are reported as flooded (pink). In addition, users can report a street as flooded (if they personally know this fact) with a few mouse clicks.

The resulting tool is now available as an open source solution. Its source code can be replicated by governments or individuals to facilitate disaster response measures in the blink of an eye.

A crowdsourced visualisation of Chennai’s flooded streets was created using this tool, after the strongest monsoon rains of the century hit and disrupted the lives of over 6.7 million people in late 2015. http://osm-in.github.io/flood-map/