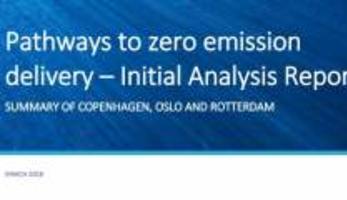 BuyZET project BuyZET is a Horizon 2020 project that looks into the procurement of innovative solutions for zero emission urban delivery of goods and services. The main goals of BuyZET project are:

Within the BuyZET project each city partner, in a first phase, has carried out a mapping exercise to identify a shortlist of procurement areas which have the biggest impact on transport emissions within the city. Following the mapping exercise, each city has prepared an Initial Analysis Report. These reports explore potential pathways to zero emission delivery for those shortlisted areas identified in the mapping reports, through discussion with internal stakeholders, and dialogue with other European cities and projects. The reports are intended to act as the basis for in-depth market engagement activities to identify innovative solutions.

In line with the City of Copenhagen’s policies and goals for environment and climate and the relevant ambitious goal of become CO2 neutral by year 2025, CO2 reduction has played a central role in choosing the two procurement areas. In the process of narrowing the shortlist down to two procurement areas, Copenhagen has considered factors alongside the direct reduction of emitted CO2, such as political focus, influence, replicability.

Copenhagen has decided to look primarily at areas for which already framework agreements have been set up and contracts with suppliers signed. To sum-up Copenhagen will in the next phase of the BuyZET project work on the following areas: