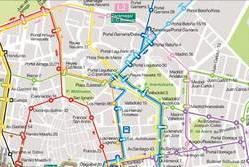 On October 30 Vitoria-Gasteiz changed its whole public transport system. The obsolete network based on 17 bus lines that had 20-30 minute frequencies and very long routes through the neighbourhoods was replaced by nine new lines. The new lines have 10 minute frequencies, straighter routes and more comprehensive coverage of the whole city and newly built neighbourhoods.

The change implied an integrated, revolutionary and completely new transport network. This replaces the old system, which was based on 17 buses lines, to a new scheme of two tram lines and nine bus lines. The new public transport network is one of the key factors of the Sustainable Mobility and Public Space Plan, a strategic framework of the city, according to the new segmentation of the city based on the Superblocks concept.The new frequencies and web topology of the network, together with several supporting measures (queue jumpers, traffic-light priorities, new platforms at the bus shelters, ...) allow for more effective transfers among lines, so that the passengers can reach every area in the city in a reasonable amount of time. This new design is the result of an intensive participative process.For the first week the public had free use of the bus service, so that they could get used to the new routes. In order to de-motivate the use of the private car in the city centre, this measure will be introduced in conjunction with an increase in on-street parking prices.As the change of the public transport network in Vitoria-Gasteiz was introduced on one day (October 30), there was a strong focus on the information campaign. 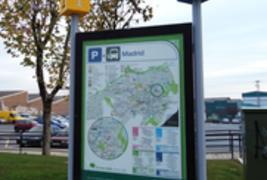