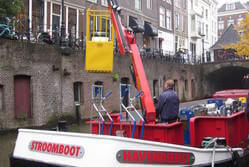 On 26-27 October 2010, Utrecht hosted a workshop on urban freight transport, jointly organized by CIVITAS MIMOSA and EUROCITIES. An afternoon political debate on the 26th opened the event, with persons from over 17 European countries in attendance.

The debate followed the style of the UK House of Commons, with the room divided into two opposing teams (pros and cons) that had to debate these three statements:1. In Europe, a freight transport plan should be a compulsory precondition for the approval of plans for new areas. 2. Certain central locations in cities should be accessible for stock provisioning 24/7.3. After 2015, it should no longer be possible to take purchased consumer goods home directly after a shopping trip. Panel chairman Donatello Piras of the Dutch Debating Institute kept everybody alert and maintained the flow of conversation. Armed with a microphone, he went from team to team, giving everyone enough time to speak and providing thought-provoking alternative opinions. The result: a real debate, engaging and successful. At the end of the debate, the politicians in attendance from Funchal, Tallinn, Gdansk, Utrecht, Bologna, Lyon and Mannheim signed a 'political statement,' which was then handed in person to CIVITAS's EU Project Officer Vincent Leiner. In this manifest, cities state that Europe can contribute to sustainable urban freight by enacting more ambitious legislation. The cities also put in a demand to the EU to demonstrate more interest in the transport of goods from shop to consumer. Frits Lintmeijer, vice major of the city of Utrecht, commented I have really enjoyed being host city for this event. Over the past two days we have been focusing on sustainable freight transport in Europe together. It is inspiring and valuable to participate in this event and to get feedback on what we are doing. Freight transport is extremely important. And at the same time the urban living environment is vulnerable. That requires efficiency and cleaner, smarter solutions.The following morning, the Dutch Ambassador for City Distribution, Eric Jansen de Jonge, made the keynote introductory speech, and was followed on the floor by mobility experts. Participants were then guided through various concepts presented by several CIVITAS MIMOSA cities. The afternoon was reserved for examining the practical implementation and mobility management of freight transport in the form of three parallel workshops. Creative thinking flowed, bringing up some clever solutions and proving that everyone - not just the experts - can come up with good urban freight management solutions. Presentations given at the event can be downloaded here.