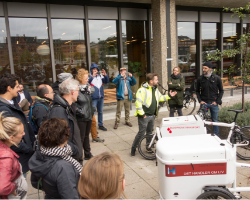 The daily functions of a hospital depend on countless moving parts –– quite literally in the case of reliable transportation. A pilot study in the Capital Region of Denmark shows that delivery times between hospitals could be halved if electric cargo bikes are used.

These findings come from a pilot programme of blood sample transportation between Frederiksberg Hospital and Bispebjerg Hospital launched in January 2017.

The project had the ambitious goal of reducing costs by 15% over three years and improving efficiency across the transportation network.

To understand how to streamline deliveries between hospitals, the daily activity of the 150 vehicle fleet was observed by GPS data. Two main routes were tested: a 3.5 km one-way trip completed 16 times per day and a 7.5km one-way trip made eight times per day.

In both scenarios, the transportation time by electric cargo bike was significantly faster than that of motorised vehicles.

As a result, a total of 12 extra pickups for blood sample transport per day is possible. The anticipated savings of 140,000 Euros annually, compared to the 307,000 Euro start-up  cost, makes the cargo fleet a smart investment for the Capital Region.

The pilot has proved to be a success, with between three and  five new hospital routes currently being planned and the City of Copenhagen programme is providing inspiration for other municipalities across Europe.

Cities such as Strasbourg (France), Graz (Austria), and Oslo (Norway) are implementing similar schemes for street cleaning and park maintenance. This shows that cycle logistics is a prime tool for providing crucial services in and meeting the needs of cities.

For more information on the pilot study, click here.

The pilot was recently demonstrated to visitors taking part in a meeting for the CIVITAS project CityChangerCargoBike (CCCB).