The 40th anniversary of air pollution monitoring in Ljubljana 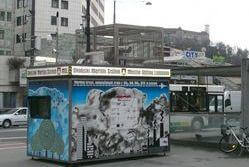 We still measure sulphur dioxide (SO2) even when it is not problematic anymore. The measuring point is located in the City center by the CIVITAS ELAN corridor. And the results? Being the city of smog in late sixties with annual SO2 of over 260 μg/m3 in 1968, Ljubljana has lowered the concentration to under 10 μg/m3 since 2006.During this long period pretty much everything has changed, from standards, measurement equipment to scope of pollutants, too. The society became aware and much more sensitive to air pollution in the city. The story of SO2 is the story of the past but it gives us good example that it is possible and worth trying. The story of today has begun with heavy traffic, PM10, noise and CIVITAS ELAN.