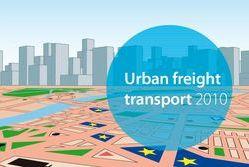 In the final months of 2010, the EU put urban freight under the spotlight, with the European Commission and the Belgian Presidency co-hosting a conference on urban freight transport and logistics from 16-17 November in Brussels.

The conference primarily centered around workshops, where participants reviewed examples of best practice, identified success factors and barriers, and came up with conclusions and recommendations. In his closing remarks Zoltan Kazatsay, Deputy Director of DG MOVE, highlighted the importance of urban freight transport and logistics in the EU’s transport policies, particularly in the context of the new upcoming Transport White Paper. In his opening speech Jean-Eric Paquet, Acting Director for European Transport Networks & Smart Transport at DG MOVE, mentioned the launch of the call for proposals for CIVITAS Plus II. This call will close on 12 April 2011.The event brought together high-level representatives from European institutions and key stakeholder associations to debate urban freight in Europe's cities. CIVITAS cities were well represented, with CIVITAS I cities Berlin and Gothenburg in attendance, as well as CIVITAS Plus cities Bologna, Ljubljana and Utrecht.Bologna presented its work on combining access restrictions policies with road pricing and van-sharing schemes, which has resulted in a reduction of delivery vehicles in the city centre and an increase in the number of clean vehicles for deliveries. Utrecht shared its knowledge on the importance of using clean vehicles for final delivery in city centres. Click here here for more information on the Urban Freight Transport and Logistics Conference.Utrecht also hosted the 5th CIVITAS MIMOSA Consortium Meeting in October, which focused on sustainable urban freight. Participants discussed solutions to current and future trends, with plenty of original ideas put on the table. Key presentations from the workshops can be downloaded from this page.