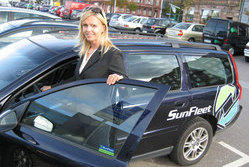 Last year SunFleet started the first two commercially based car sharing sites in Malmö. SunFleet run car sharing sites with clean vehicles and there are big plans for the future. The concept of SunFleet is unique; the cars are used for as many hours a day as possible- therefore serving several different groups of users.

SunFleet established the car sharing sites after liaison with local businesses, and since spring 2006 they have also opened the sites to private persons. In this way they can keep the vehicles running around the clock at a small cost. “The weekend prices for private individuals are especially favourable”, says Caroline Jiborn of SunFleet Malmö who also emphasised the advantage of the car sharing site. Namely, as a private person you do not need to worry about expensive parking fees, washing, maintenance and insurance. For those that do not need their car every day, they can save a lot of money as they avoid the hassle of keeping a car in the city. There are also benefits for companies: They can avoid a lot of administrative tasks for their company cars such as services and insurance. Traditional company cars are not used for many hours a day, which is ineffective and also encourages people to use their private cars in their work causing more problems.SunFleet is owned by the car hire company Hertz who are only running clean vehicles in Malmö. The cars are from Volvo and run on natural and biogas or ethanol. Since the late nineties, SunFleet have only used clean vehicles. This market is growing stronger and SunFleet want to expand across Scandinavia and then to the rest of Europe.www.sunfleet.com