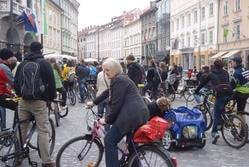 Ljubljana’s Cyclist Network invited all supporters of their work, which is to improve cycling conditions and raise interest also for other sustainable modes of transport - to join the cycling parade through city centre last October and the CIVITAS ELAN team was happy to respond.

The “demonstration” road led more than 100 participants to the headquarters of the Slovenian government and the Parliament to emphasise that, according to the president of the Network, the political leaders still didn’t recognise cycling as an integrative part of transport policy. They continued to the future Fabiani bridge, highlighting the needs for cycling path on this new construction, and to the City Hall, where they pointed out the lack of bicycle racks in front of this building. The proposal of new traffic legislation predicted the obligatory use of helmets for all cyclists, not only children, which caused protests from cyclists and the proposal was later, thanks to them, removed. “It is time to make Ljubljana again the cycling city as it once was!” stated the Network’s president Gašper Žemva, whose initiative was supported by CIVITAS ELAN. They believe that Ljubljana has a huge potential of becoming a high-quality city - a city with good conditions for cycling and walking, as well as fast and safe public transport. After the parade, some of the participants attended the creative workshop, organised by association Smetumet, offering them the opportunity to decorate, design and upgrade their bicycle or other sustainable mean of transport by using waste or recycled material.