In 2013, the City of Stockholm launched a range of ambitious initiatives to improve freight planning. These are now starting to bear fruit.

Through close cooperation between the city and various stakeholders, the first steps were taken to establish a commercial consolidation solution in the city centre and a pilot project for off-peak (night) deliveries.

In 2014, these and other measures were included in the “Stockholm Freight Plan 2014-2017”, the city’s first such plan. Since then, Stockholm has engaged in various national and international initiatives and created a network of partners to work on its freight initiatives.

It is the result of a collaboration between the city, a recycling company, a logistics operator, and a real estate company. The business model is strictly commercial and, uniquely, the operation receives no public funding.

The “off-peak” pilot project was a triple helix collaboration carried out between 2014 and 2016. It investigated how the city’s night ban on heavy lorries could be lifted using clean and silent vehicles and how to increase capacity using existing infrastructure.

Two trucks - one electric hybrid and one propelled by biogas - distributed food to restaurants, hotels and supermarkets in the inner city. The main obstacle was noise disturbing residents. Thus, a significant part of the research focused on studying vehicle noise, alongside the last few metres of the delivery.

Project results were positive with regards to transport efficiency and emissions. Another important lesson was that the biggest noise-related problem lies in the amount generated in the last few metres of a delivery. Certain levels of background noise can in fact be an enabler for freight transport in off-peak hours, as this noise drowns out the noise associated with the delivery.

Stockholm is in the process of updating its freight plan and identifying future priorities. A new night delivery project is one of the measures in CIVITAS ECCENTRIC, with the first steps being taken towards a new regulatory framework for night transportation.

ÄLSKADESTAD will be expanded to cover the old town from Summer 2018 onwards, with new partners likely to join. Important mobility and environmental concerns such as decarbonisation, electrification, digitalisation, and automation are incorporated into the new plan.

Rapid urban growth and a large number of big infrastructure projects mean construction logistics and handling of aggregates require increasingly innovative solutions. The possibility of using barges for the transportation of construction aggregate on the city’s inland waterways will also be studied within CIVITAS ECCENTRIC. 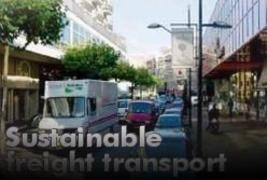