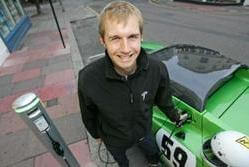 Brighton will host another first this weekend when an electric vehicle takes part in the annual speed trial event on Madeira Drive. Before that two Tesla Roadsters, driven by Gian Avignone, Tesla Motors UK Sales and Marketing Manager and Keith Robertson, 2009 Britcar Champion, will be driven down from London to Brighton, proving that commuting to the capital using an electric vehicle is now a real possibility.

The council is providing an electric vehicle charging point, known as an Elektrobay, for one of the Teslas to charge up ready for the speed trial which takes place from 11am on Saturday 11 September. Although the Roadster has ample charge for this return journey, it will refuel during the day to demonstrate the convenience and ubiquity of urban charging points. Organised by the Brighton & Hove Motor Club, the speed trials event first took place in 1905 which makes it the longest running motorsport event in the world. Brighton’s Elektrobays, produced and installed by Brighton-based Elektromotive, the world’s leading manufacturer of electric vehicle charging points, are in Bartholomews (next to Brighton Town Hall) and Ditchling Road (opposite The Level open space). Electric Vehicles produce zero emissions on the road and offer substantial advantages over conventional vehicles in terms of air quality for town and city centres. Brighton & Hove City Council has recognised these benefits and installed four on-street Elektrobays, with plans to install another four in two other locations across the city. The city is a popular destination for visitors, especially from the capital, and with technology getting better all the time, vehicles are now starting to do the trip from London to Brighton. Council leader Mary Mears said: “We have a can-do culture in Brighton & Hove and are committed to nurturing new business that is looking to the future, so we are delighted that car manufacturers are keen to showcase their latest innovations in Brighton.”Calvey Taylor-Haw, Managing Director of Elektromotive, added: “It’s fantastic that a modern day electric car is making the journey from London to Brighton proving, as predicted, the electric vehicle revolution is here. However, if electric car sales are to take off in the UK, over the next few years, in a way that would contribute considerably to the reduction of the country’s carbon output, Elektrobay networks must be rolled out across the country. Events like this demonstrate that Brighton is one of the key areas in the country leading the way with provisions for electric vehicles.”Related information:Elektromotive:The simple-to-operate Elektrobay was first introduced in Westminster, London, in 2006, and there are now more than 195 units located across the capital. A further 395 fully-operational Elektrobay charging stations have been installed in cities and shopping centres around the UK. The Brighton-based company also exports Elektrobays to Belgium, Denmark, Luxembourg, Iceland, Sweden, The Netherlands, Germany, South Korea and Saudi Arabia, where altogether further 400 Elektrobays have been installed. The global total currently stands at over 1,000.