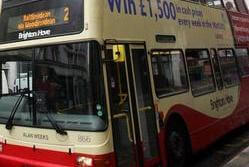 Bus journeys in Brighton and Hove will be revolutionised with the introduction of a new smart card system. Machines accepting the new technology, which is similar to London's Oyster card, have been installed on the city's Bus Company's entire fleet.

Currently, customers travelling by different modes of public transport (by bus and train for example) have to buy a ticket at each leg of their journey. The introduction of smartcards will offer passengers a simpler and more seamless way of travelling.The system is planned to be up and running in the next two months once chips (which read the smart cards) are fitted inside the machines; and it is hoped the first smart cards are in use by the summer.The technology has been developed by the Department for Transport and is currently being rolled out nationwide. The Brighton & Hove Bus Company is working in partnership with the local rail company and Brighton & Hove City Council to introduce smartcards.The project was made possible through a funding from the CIVITAS Initiative.