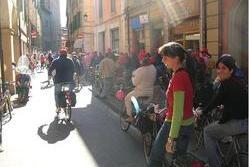 The Municipality of Bologna has finished the second phase of a semi-pedestrian area around the University to reduce pollution and use of motorised vehicles. Results recently published showed an excellent performance in terms of improved environmental, social and economic quality levels in the area, that now covers 50 hectares, which is most of the University Area.

As part of the CIVITAS MIMOSA framework the Municipality of Bologna have finished the second phase of a semi-pedestrian area around the University to reduce pollution and use of motorised vehicles and in turn promote public transport, bicycle and pedestrian traffic.Implemented before MIMOSA and limited to only a few streets, a pilot phase covering a small area was designed to test, measure and evaluate the opportunity to extend for other areas. The area now covers 50 hectares, which is most of the University Area. With few exceptions (e.g.: residents within the area), vehicles access is forbidden every day (h. 0-24) both for cars and motorcycles. Access control and enforcement in the restricted area is provided by ITS systems based on two cameras that automatically fine transgressors.Actions put into practice included:Modification of traffic schemes in the area;Placement of two enforcement cameras assigned to control vehicle access;Implementation of the software to regulate enforcement;Municipality police presence during 1st phase of implementationA large-scale communication campaign to inform citizens of measurecontinued procedure improvement taking into account citizens and stakeholders requirementsSmart card recognition system to pass through the electronic pillars.After a little more than a year, published results showed an excellent performance in termsof improved environmental, social and economic quality levels in the area:70% decrease in cars entering the area compared to the previous period freeing the area from traffic chaos and restoring their original residential and social function.Number of fines connected to the unauthorized access has decreased during the last 9 months, showing public awareness of regulation.Decrease in cars has helped residents find parking spaces easily and closer to where they live.Polluting emission and the benzene concentration has decreased. The trend shows that pedestrian areas or very limited traffic zones usually register a low level of air pollution.People using public transport every day has increased. The Municipality of Bologna registered 25% more passengers taking the shuttle bus in the University area.To further assist passengers, the line has been improved with three new stops and with a prolonged timetable including night time.Local citizens now also have more choice when it comes to using bikes as opposed to private vehicles. The city has installed 24 new bikes to be hired in the area.Finally, with the reduction in cars come new commercial opportunities. A number of open air pubs have begun to appear in the pedestrianised zone encouraged by the increased footfall.Given the measure’s success, further studies are underway to investigate other opportunities and problems that were ignored in the pilot phase. Preliminary results show that the semi-pedestrian area could be further extended with the simple installation of three new cameras controlling vehicles’ access. If these results continue for the foreseeable future, it is possible that the semi-pedestrian area will be further extended within the next two years - the timeline of MIMOSA.