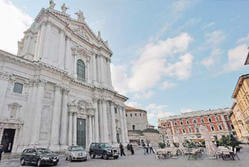 Corso Mameli and Piazza Paolo VI (South side) in Brescia became pedestrian areas on Friday July 22.The measure was launched on July 20 in a meeting to show the different stages of a process that "will change in a consistent and coordinated manner the way we live and think the city" said Brescia Deputy Mayor Mr.Fabio Rolfi.

Brescia introduced in the first two areas (Corso Mameli and Piazza Paolo VI) the ordinance that will establish the pedestrian scheme. "An intervention", as reported by the Administration, "that will encourage the revitalisation and a better sharing of public spaces".