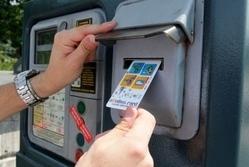 The electronic card "Omnibus Card" was presented in Brescia on 4 July. It will facilitate public transport use through a single device, valid for bus, car parks and "Bicimia" , the local bike-sharing service. The card was presented by the Deputy Mayor Mr Fabio Rolfi and by both the Municipality of Brescia and Brescia Mobilità. It will cover a range of services introducing "a key in the spread of sustainable mobility in Brescia to promote services and facilitate use of public transport.''

Citizens will load more services into the same card, according to their needs. "It was one of our main targets" said the president of Brescia Mobilità Mr Valerio Prignachi. "We believe that the right of mobility is ensured by providing easy access to the system. In addition, the Omnibus Card facilitate the integration and intermodality". According to General Manager Mr Mark Medeghini, "we had four passes for four services so far: now you can do everything with a single card". "With this initiative, citizens will no longer need to have multiple cards and tickets into their pockets," added Deputy Mayor and Councillor for Transport Mr Fabio Rolfi, "we are placing ourselves at the forefront of the mobility services." The new ticketing system has been developed and updated as part of CIVITAS and allows Brescia to become the first Italian city to promote an intermodal service through a single electronic card, by facilitating the use of different transport systems. 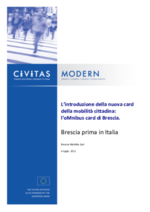