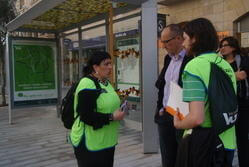 The change of the public transport network in Vitoria-Gasteiz is supported by an information campaign that, among other activities, includes an initiative to attract volunteers to travel with public transport users and inform them about the new lines and stations. There are 101 volunteers that will support the passengers for a total number of 2.845 hours for three weeks. The initiative began on October 30.

As the change of the public transport network in Vitoria-Gasteiz was applied on one day (precisely October 30), there was a strong focus on the information campaign. During the first week after introduction of the new network, volunteers stayed at each station for 15 minutes, they kept moving along the lines giving support and information to the users. For the second and third weeks volunteers will spend 10 minutes in each station, so that they can cover more stations.Two weeks before the arrival of the new network, on October 19, information was available in several marquees located in strategic points around the city. From October 23 to October 29, bus drivers tested the new lines and the public could use the buses for free in order to get to know the new routes and how the network functions.Though the initial objective was to give information for 1.440 hours, the success of the specific campaign made it possible to extend it to 2.845 hours. Resulting in a wide improvement in the support to the users at the bus stops. The campaign was launched in order to recruit volunteers on the street, and university students in particular.