Mobile children get on their bikes in Aalborg 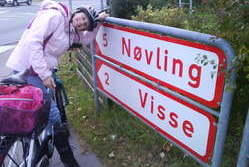 When school started in August 2010, the city of Aalborg ran an innovation campaign as part of the CIVITAS ARCHIMEDES project to get school children to cycle to school. For two months, children from fifth to seventh grade had to solve riddles and bike to school to win the campaign competition.

The campaign was designed to motivate children to take part in the campaign and get on their bikes in order to win the campaign's competition. The campaign was built on an internet platform that evolved through the competition and the children also got information on their mobile phones throughout the campaigning period.The big question was then: How will this untraditional campaign be received by the children and are they willing to activley participate? Throughout the campaigning period it was obvious that the children took up the challenge and solved the riddles. In total, the school children uploaded more than 600 photos on the campaign website and visits to the homepage were on average around 4 ½ minutes. These indicators suggest that the children were interested in the campaign, but as part of the evaluation they were also asked directly about their experience with the campaign. A survey conducted among the target group reveals that 82 percent of the children said that they know the campaign. Furthermore, 30 percent state that they have been active in the campaign by solving riddles and challenges. Overall, 64 percent of school children stated that it was fun to participate in the campaign. The elements of the campaign, where the children had to go out on their bikes or had the possibility to upload photos on the internet were particularly popular. An important result of the survey is also that 22 percent of the participating children state that due to the campaign they feel more like biking to school.The results from the evaluation indicate that alternative ways of communicating with this target group combined with a focus on involving children in a positive way, is the way forward to create healthy and sustainable travelling habits among school children. When school starts in 2011 a follow up campaign built on the experiences from last year will be introduced in schools.