Launch day of the new tram fleet in Gdansk 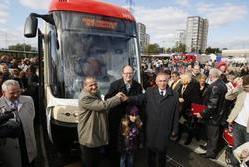 CIVITAS MIMOSA’S club colours were out in force on 2 October for Gdansk’s Transport Fest, to showcase two of the new 35 PESA ‘SWING’ trams for Gdansk. In 2009, Gdansk City Council and PT operator ZKM signed a landmark deal with PESA Bydgoszcz SA, a Polish company specialising in construction, modernisation and repair of railway rolling stock, to renew the Gdansk tram fleet.

All three partners, The Mayor, Adamowicz, PESA president, Zaboklicki, and ZKM president, Zgliczyński came out to celebrate the roll out of the new trams and wave goodbye to the ‘old timer’ trams with the people of Gdansk. Cameras clicked all day long.The new SWINGs will operate in the district of Chelm, the most recent addition to Gdansk’s tram line, which opened in 2007. Given MIMOSA Gdansk's love of promoting tram use, particularly the Chelm line, the MIMOSA Team jumped on board. Taking over half a tram with their stands, the team gave out promotional materials to make their message heard. Following a well developed PR campaign, a huge crowd turned out to see the inside of the new trams for themselves. The sheer number of people in the crowd provided a constant flow of people to the CIVITAS MIMOSA tram to hear about the progress of the various measures ongoing in their city and elsewhere.