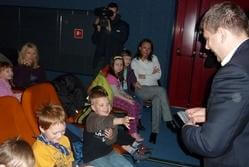 More than 600 children answered Szczecinek’s invitation to learn how to be safe when traveling around the city on foot or by bicycle.

On 20 November, pupils from two primary schools and one kindergarten gathered to talk with police representatives and watch a film about how to behave on the streets as pedestrian or cyclist. The event was very interactive and gave the children a chance to get involved. Starting from the idea that “being safe is being visible”, all children received reflective arm bands. One of the main activities within RENAISSANCE in Szczecinek, is the campaign to promote public transport and cycling, with children as prime target group. In Szczecinek, there are no routes to school without crossing the street, and therefore the educational activities for children are considered very important by the city.